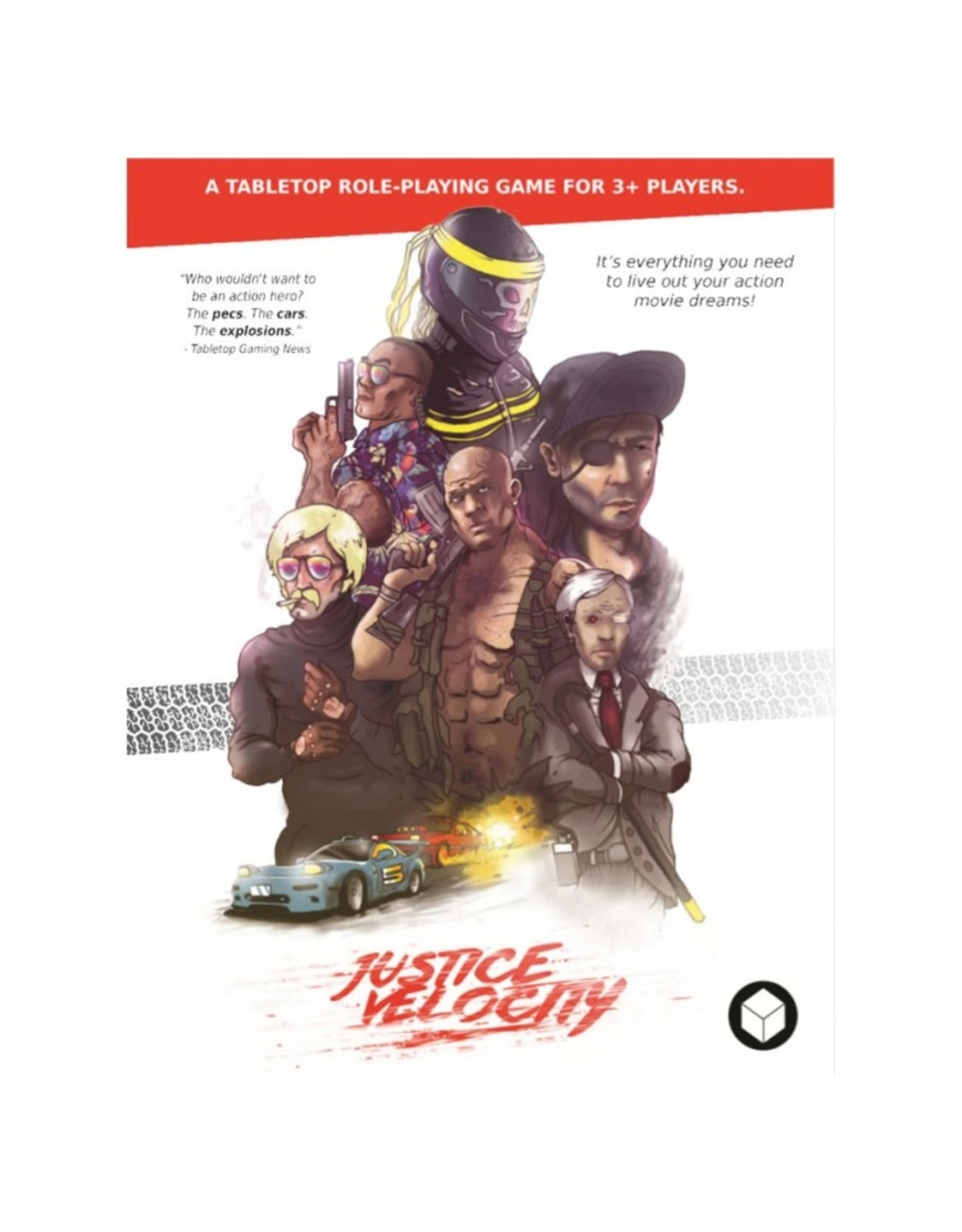 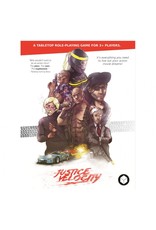 Justice Velocity is an action movie themed tabletop role-playing game for 3+ players. Inspired by action movies like the Fast & Furious franchise, Rush Hour, or Bad Boys and anime like Initial D-- Justice Velocity puts you in the driver’s seat. It’s an exercise in collaborative storytelling that puts the stakes of a race or the fate of deadly computer viruses up to your players’ skills, abilities, and the roll of the dice. It's a fast-paced 2d6 system that's light on the rules, and high on octane. With quick and easy character design, Justice Velocity invites tabletop newcomers and veterans alike to leap quickly into the action movie universe. The core book covers Character Creation, Vehicle Rules, Abilities, Items & Equipment, an Adventure Synopsis, and more!

Justice Velocity is a game of heists, hijinks, espionage, and fast cars. The game's mechanics encourage players to push situations into overdrive with High Octane Mode and spend Juice Points on triggering wild abilities. There are also a variety of rules for conducting high speed chases, street races, and vehicular combat so that you can always keep the action rolling: Octane Chips - Octane Chips are used once per session to trigger High Octane Mode. Players slam their chip on the table and receive a bonus to any roll--giving them the boost they need to make the impossible happen. Juice and Abilities - Players can expend Juice Points to trigger Abilities such as Ultimate Drift, Gunslinger, and Activated Strength. Dynamic Vehicle Rules - Whether it's a drag race to the next light or a chase sequence throughout the entire city, Justice Velocity lays out vehicle rules no game master should be without, including: Position-Based Racing, Cumulative Racing, and Car Combat/Action Sequences. There's even a table for generating random events during vehicle sequences such as back alley shortcuts, banana peel hazards, and oil spills.

The book also walks you through the character creation process by introducing you to archetypes essential to any action movie story: The Gunner, The Driver, The Hacker, The Medic, The Mechanic, The Face and The Muscle/Martial Artist. Justice Velocity gives you and your players as many tools as possible to live out your action movie dreams. There are 20 pieces of unique art (and a cover) designed by Anders Karlsson, layout design by Nathan Paoletta, and 20,000+ words from Clipper Arnold which lay the groundwork for 42 Items/Equipment, 24 Skills, 21 Vehicle Upgrades, 16 Abilities, and 7 Archetypes--all in one book. Most Justice Velocity games will presumably take place in present-day settings. They involve street racers, clashes with the law, and staying on the edge. That being said, Justice Velocity is relatively adaptable. It could be a game about local teenagers racing down the mountain or cops chasing down bad guys. It could be about an '80s undercover narcotics division in Miami or it could be about futuristic cyberpunk motorcycle gangs. There’s something exhilarating about sending Hot Wheels down a track into their doom. There’s something thrilling about unnecessary explosions. There’s something amazing about seeing whether or not a car can jump over the opening of a live volcano. Justice Velocity is an unapologetic, adrenaline-fueled romp which delves into the nature of exergy and machine fetishism. It pushes physics, bodies, and systems to their limits. When justice calls, sometimes it’s the gruff, meat-headed, cargo-pants-donning voice of utilitarianism that picks up the phone. This is a foray into that universe... one in which steel, muscle, and ingenuity can prevail and save the world from certain peril.