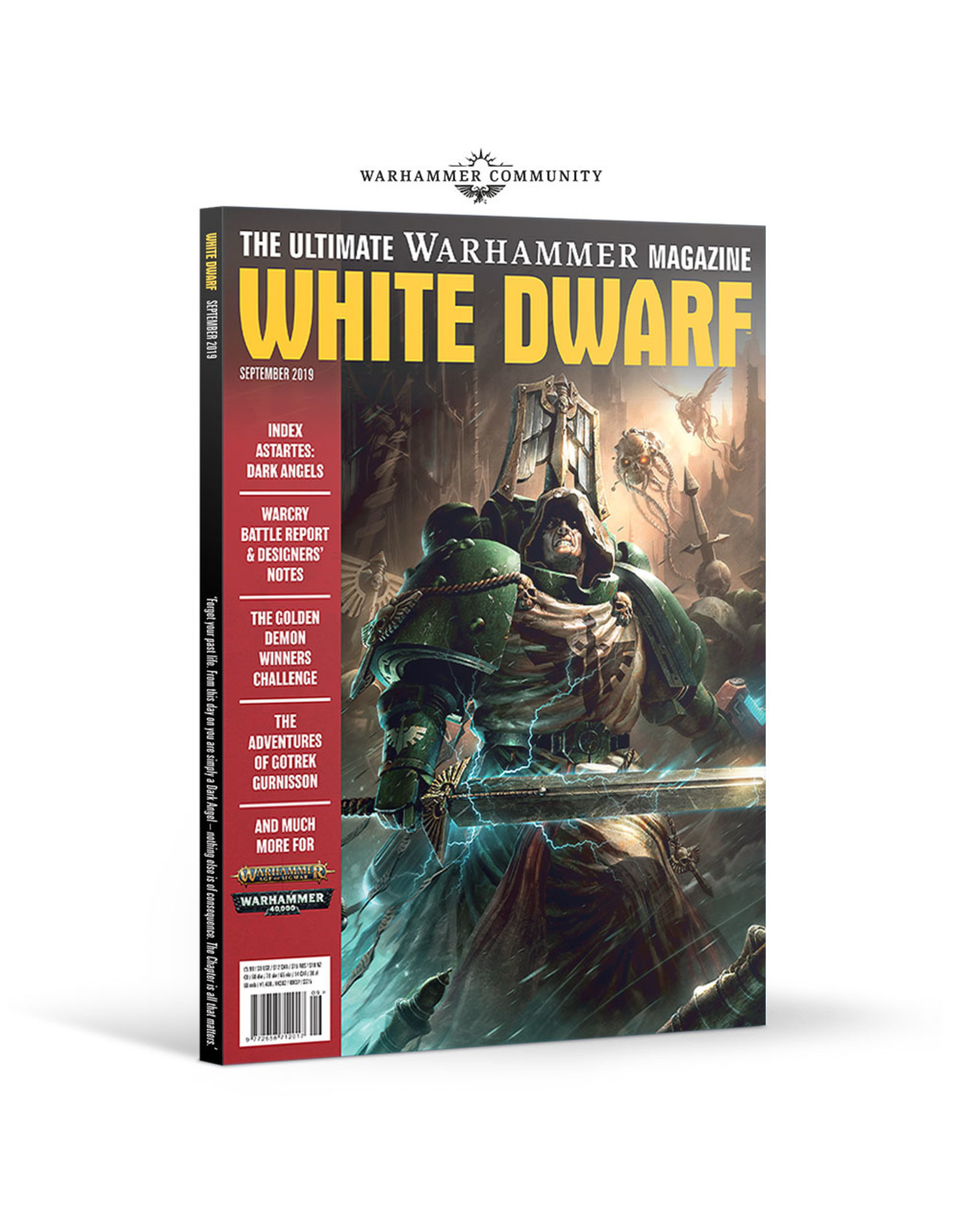 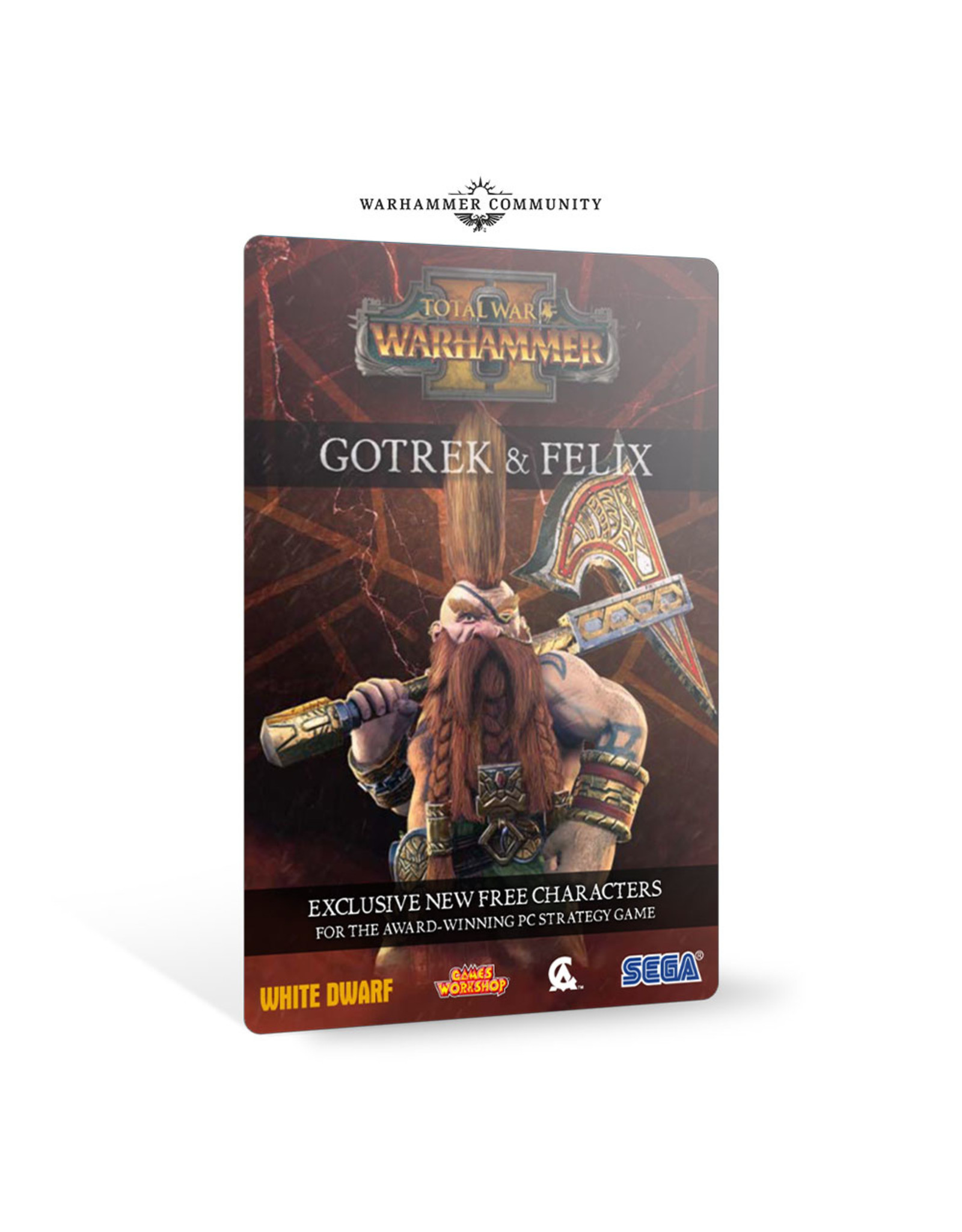 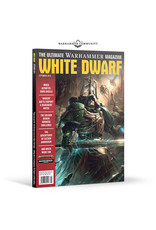 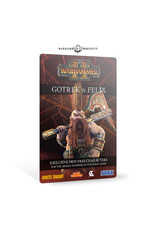 But before we go into the reasons why a glowering Dark Angel graces the cover of the magazine, you’ll notice that your issue includes a small card attached to its front with a certain dwarf, who is also glowering. But what does this mean? Well, on its reverse side, you’ll find a free code that unlocks Gotrek Gurnisson – and his trusty sidekick Felix Jaeger – in Total War: Warhammer II!

That’s right, one of Warhammer’s most iconic characters is about to make his debut in Warhammer’s most iconic PC strategy game! Gotrek and Felix will be available as a unique Lord and accompanying hero for Dwarf, Empire and Bretonnian factions. While under your control, they’ll serve as powerful allies and can even be reinforced with your faction’s units as normal. However, Gotrek’s doom waits for no man – or dwarf, for that matter – so don’t expect him to be around forever. Though he may occasionally leave your service to seek his death, he’s famously incapable of achieving it. Destiny, it seems, has always had other ideas for the Slayer, so you’re sure to meet him once again further down the line!

Oh, and did we mention that, like in Realmslayer, Gotrek will be voiced by the mighty Brian Blessed in the game? Cool, huh?!

Read all about the continuing adventures of Gotrek Gurnisson in this multipart interview with the latest writers, designers and artists to take on the mantle of the legendary Slayer. First up is acclaimed miniatures designer Brian Nelson, who was responsible for breathing fresh life into Gotrek as a stunning new model for the Age of Sigmar setting. Next up are authors David Guymer (who penned the script for Realmslayer and the upcoming sequel, Realmslayer: Blood of the Old World) and Darius Hinks (writer of the new novel Ghoulslayer), who discuss the joys of writing about the doomed wanderer. Finally, illustrator Johan Grenier discusses how he went about producing the stunning artwork for the cover of Ghoulslayer – and which also features as the subscriber-only, full-art cover of September’s issue of White Dwarf. 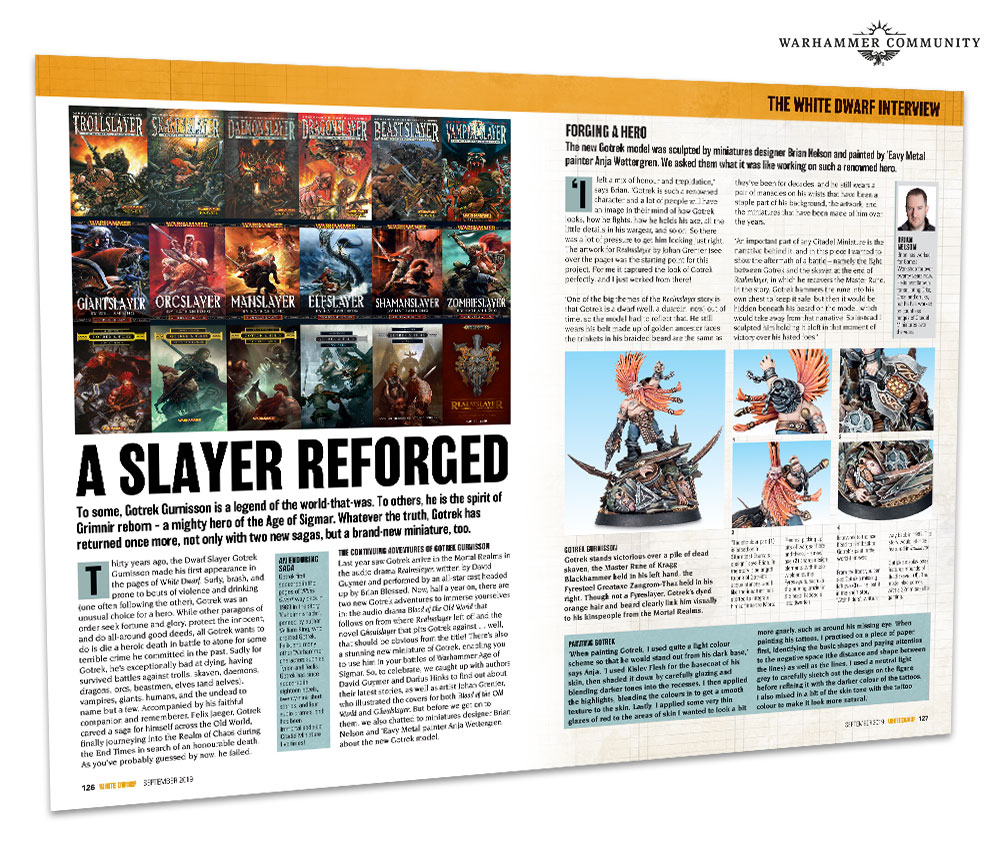 You’ll also find plenty of other awesome Warhammer Age of Sigmar content, including…

Jervis Johnson discusses how the rules for Meeting Engagements and Open War can revolutionise the way you play small-scale games.

A Tale of Four Warlords – The Stormvault Warlords

Catch up with Matt, Alex, Steve and Ben to see how their collections – and this month, scenery pieces – are progressing.

When Six Tribes go to War

Miniatures designer Maxime Pastourel reveals all about the creation of the incredible Warcry miniatures.

Two Warcy Battle Reports are fought back to back, following the journey of an Iron Golem warband.

Read this new campaign event for Warcry! No prizes for guessing what’s involved…

Yes, that’s why the secretive Dark Angels are featured on this month’s cover! Learn all about the Sons of the Lion, their fall from grace and endless quest for redemption in this detailed treatise. As if that wasn’t cool enough, there’s also an exclusive Crucible of War mission, The Hunt, that sees the Dark Angels fighting to secure an agent of the Fallen. 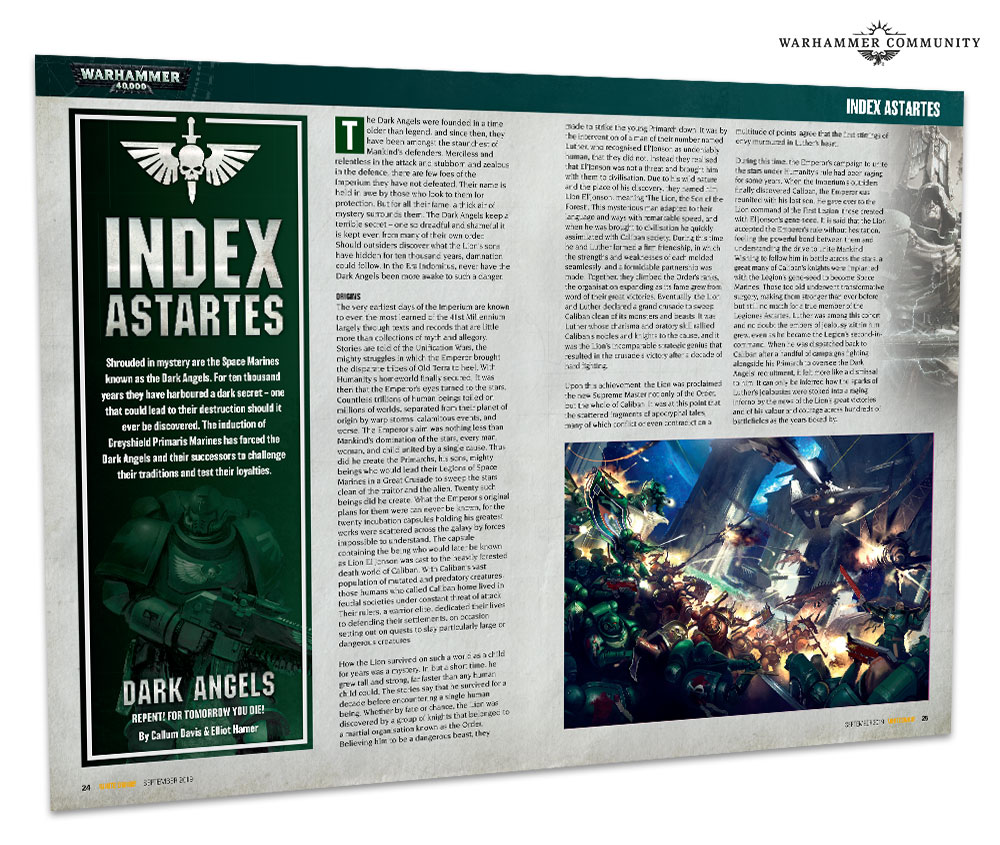 But that’s not all for our cover stars – there’s more on the Dark Angels and other cool stuff besides!

Have you ever wondered how to paint up your towering war machine as a member of the Deathwing? Look no further than this handy stage-by-stage guide!

The Angels of Death

Echoes From the Warp

Robin Cruddace discusses his own hobby journey over the years. Howling Griffons may be present.

If you’re a fan of frozen tundras and snow-capped mountains,* you’ll love this investigation into all things cold and icy in the 41st Millennium, ranging from artwork to suggested colour schemes and basing methods.

Of course, it’s not all about Warhammer Age of Sigmar and Warhammer 40,000! Here’s what else you can look forward to reading…

Phil Kelly chats about his Nighthaunt warband, with which he won the recent studio tournament. 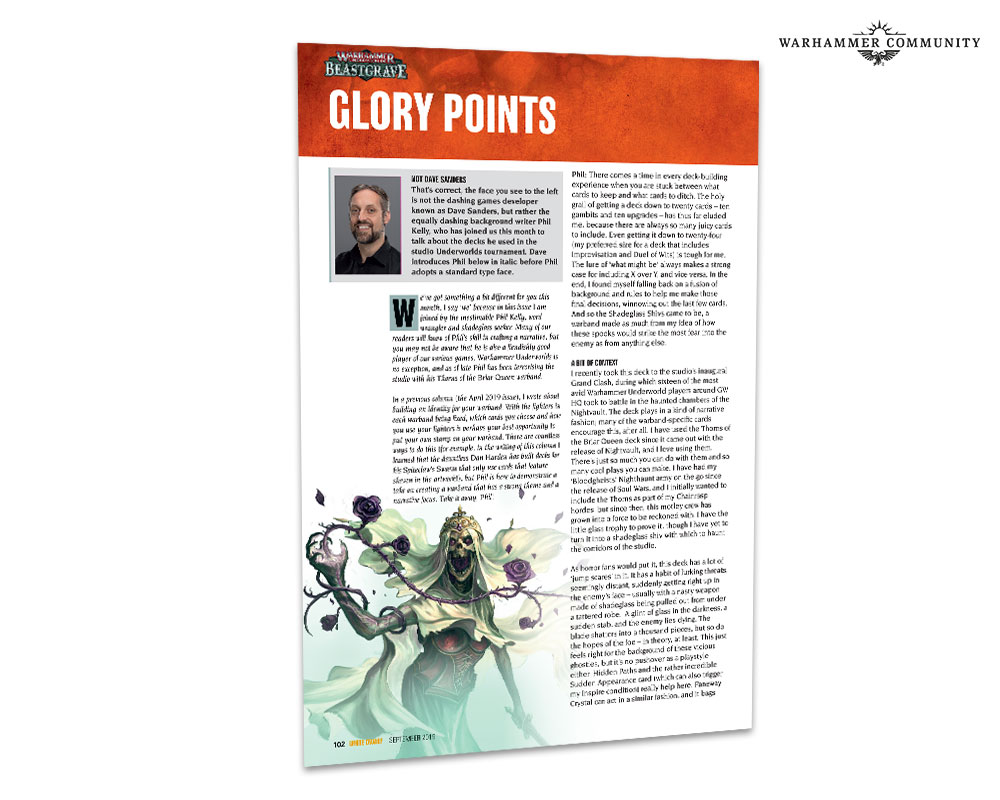 Check out this showcase of 12 more incredible entries from this year’s Golden Demon Winners Challenge. 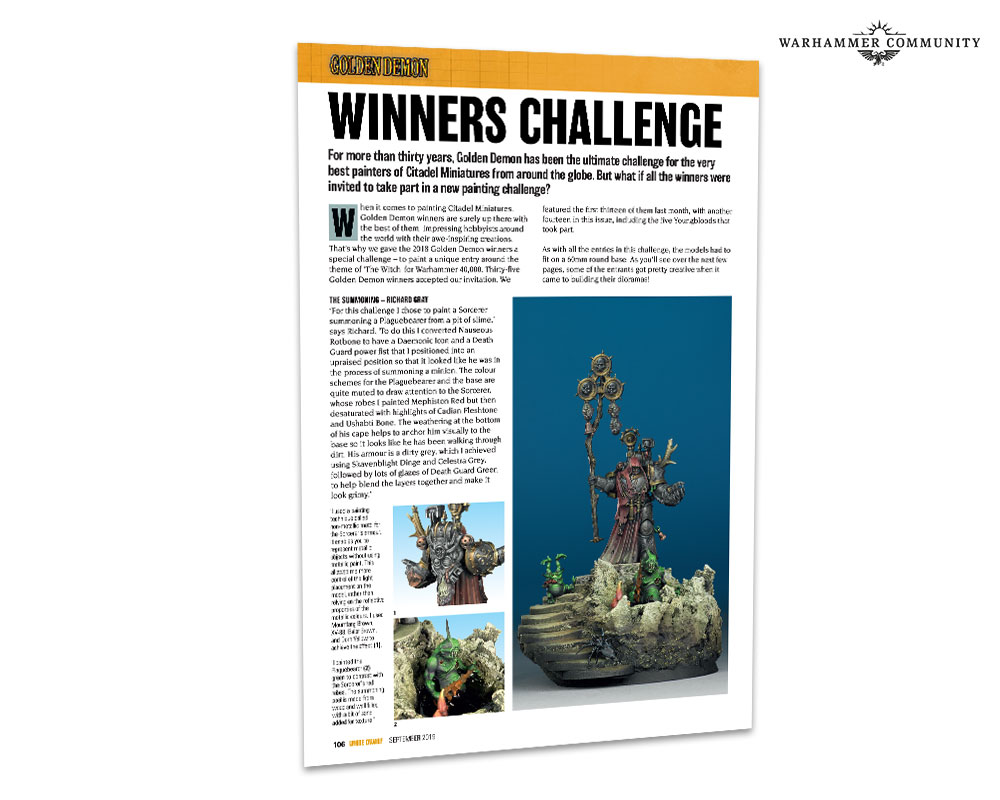 Multiple tournament winner Jay Clare (seriously, he’s won the lot!) offers his wisdom on how to get the most from your Heroic Actions in the Middle-earth Strategy Battle Game. 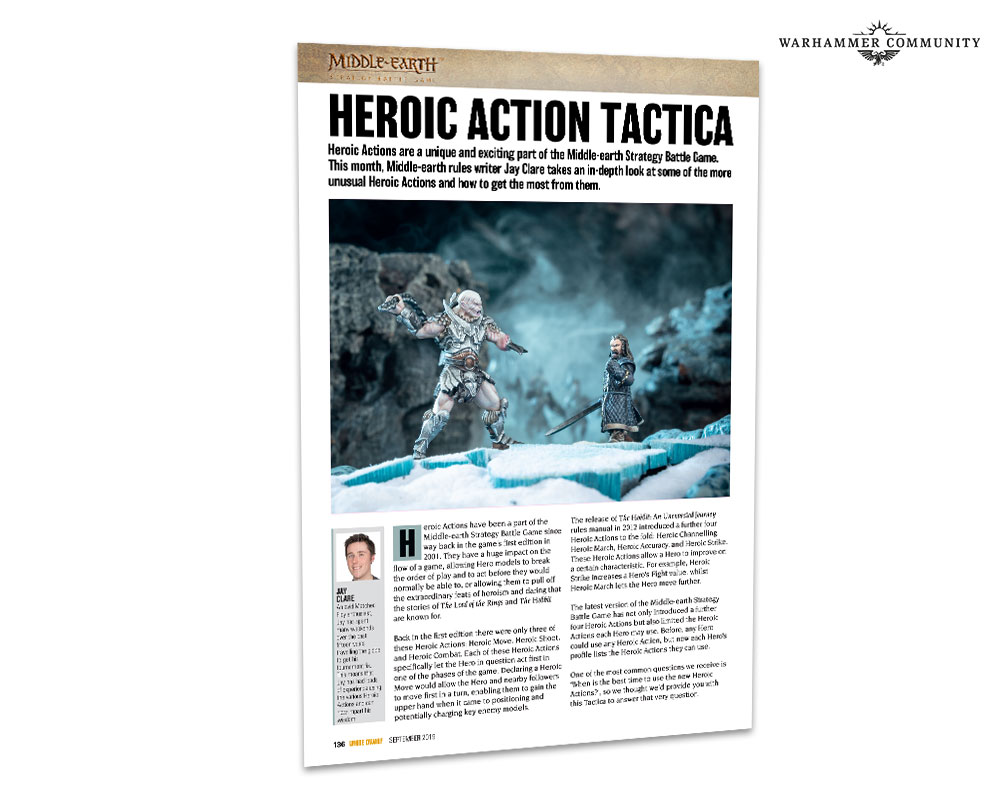 Many of you have been asking for Warhammer 40,000: Kill Team rules for the awesome miniatures from Blackstone Fortress – Escalation. Well, your wish is our command! 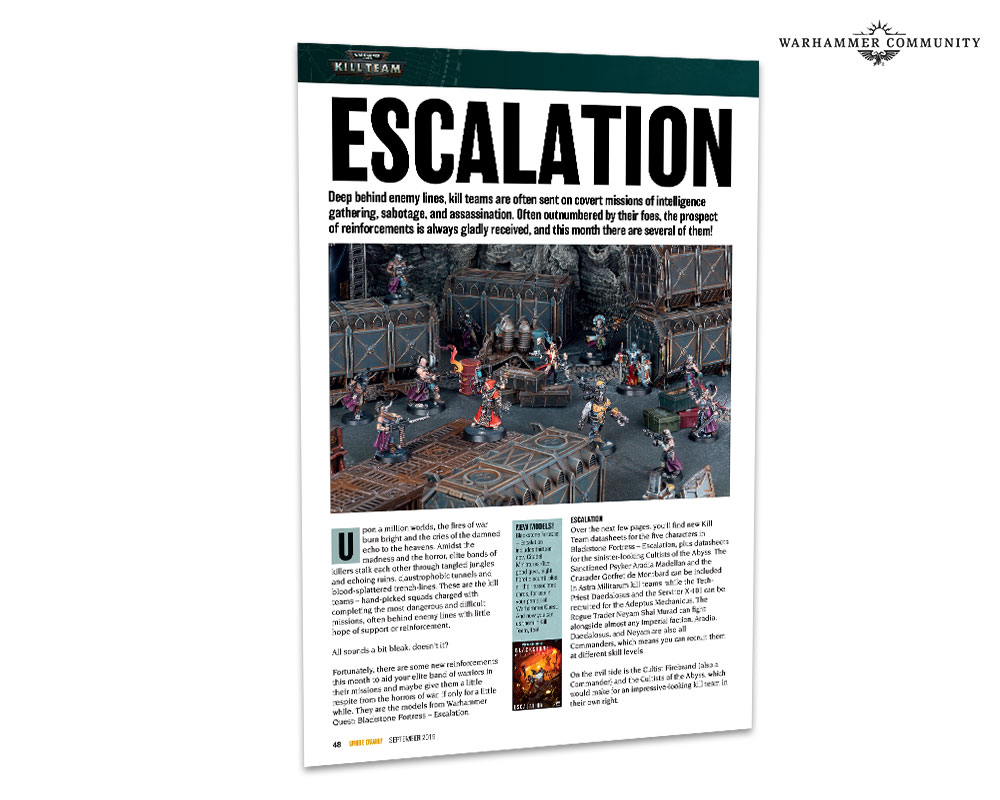 So this IS about Warhammer Quest: Blackstone Fortress! This article introduces rules for the aforementioned brothers – a pair of massive Ogryns, no less – to your games as new retinue characters! 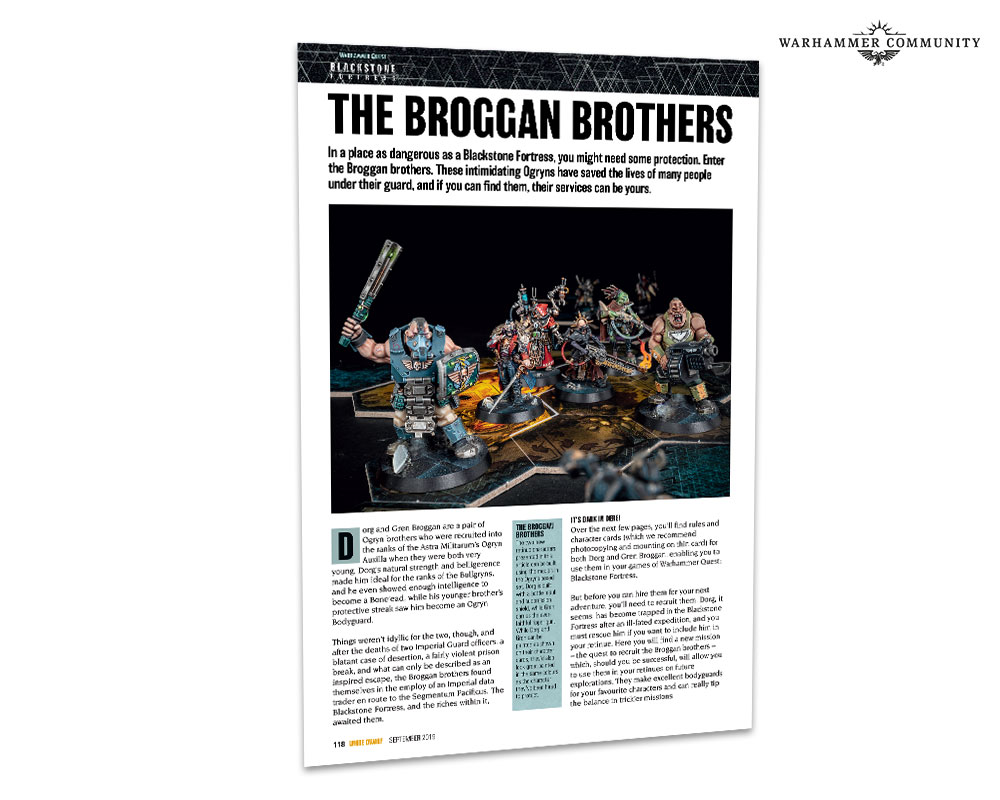